Hit enter to search or ESC to close

On the corner of Olympic Boulevard and Locust Street in Downtown Walnut Creek. $10 Valet and complimentary self-park available.

Ruth’s Story
Over four decades ago, Ruth Fertel, a divorced mother of two, mortgaged her home for $22,000 to buy a small 60-seat restaurant in New Orleans, Louisiana named Chris Steak House. Shortly thereafter, a fire forced her to change the original location and she renamed the restaurant, “Ruth’s Chris Steak House.”

From our humble beginnings on Broad Street in New Orleans to our current position as the world's largest fine dining company, Ruth's Chris Steak House has come quite a long way in its first four decades. In 2015, we celebrated our 50th anniversary, and we consider it a celebration of the life of a woman who broke the mold - our founder, Ruth Fertel. 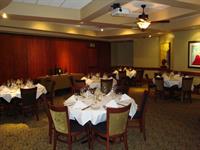